WSWS (2022-09-13). Amid corruption charges and cabinet resignations, President Pedro Castillo's government on the brink in Peru. wsws.org Castillo survived his first year as president because his left-populist guise as a rural teacher and union leader was of use to the ruling class in containing an emerging movement of the working class.

_____ (2022-09-12). Ten Years Ago, Chicago Teachers Gave Us All A Jolt Of Hope. popularresistance.org If you feel like your union needs a jump-start—whether you're a longtime shop steward or just started your first union job—this book is for you. | The impulse you have ("This union could be stronger and better, and I want to help change it") makes you part of a long tradition—what we at Labor Notes affectionately call the trouble-making wing of the labor movement. | One basic principle unites us troublemakers. We believe democracy, meaning broad member participation at every level of the union, is the heart of union power. | The Chicago Teachers Union's 2012 strike didn't just put the union on t… 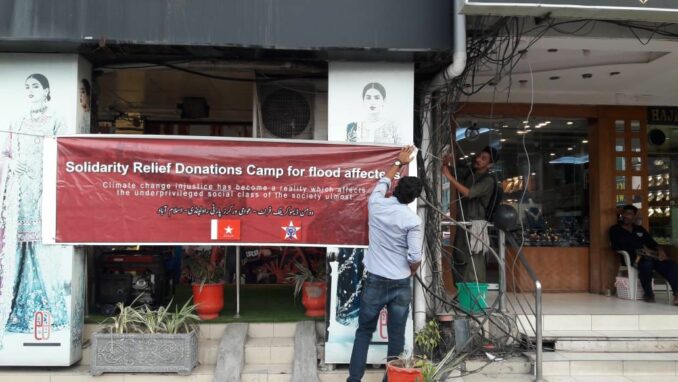 Prof Michel Chossudovsky (2022-09-12). 9/11, Osamagate and The "Blowback". America's "Just War" against Afghanistan. globalresearch.ca Author's Note | The article below entitled "Osamagate" was first published on October 9, 2001, two days after the onslaught of the bombing campaign directed against Afghanistan on October 7, 2001. | Within hours of the 9/11 attacks, Osama bin Laden was …

Prof Michel Chossudovsky (2022-09-12). The Bin Ladens and the Bushes: On 9/11 George Herbert W. Bush Meets Osama's Brother Shafiq bin Laden. globalresearch.ca One day before the 9/11 attacks, the dad of the sitting President of the United States, George Herbert Walker Bush was meeting none other than Shafiq bin Laden, the brother of alleged terror mastermind Osama bin Laden.

By Dean Baker / Beat the Press/CEPR The standard line in policy circles about the soaring inequality of the last four decades is that it is just an unfortunate outcome of technological change. As a result of technological developments, education is much more highly valued and physical labor has much less value. The drop in …

_____ (2022-09-12). Housing Activists Crash Developers' Party. popularresistance.org Philadelphia, Pennsylvania – Residents of the University City Townhomes and their supporters, determined to save their homes from destruction by property developers, have taken their fight directly to the movers and shakers behind most gentrification in Philadelphia. | Over 100 residents and supporters converged on the University of Pennsylvania convocation for the incoming class of 2026, Aug. 29, shouting down President Liz Magill with chants of "Housing is a human right" and "Stop Penntrification." Protesters then used the occasion to educate students about UPenn's racist history in the destruction of a major B…

Ashik Siddique (2022-09-12). Canceling All Student Debt Would Cost About as Much as The Pentagon's F-35 Boondoggle. commondreams.org When it comes to military spending in the United States, money is no object—even for programs like the F-35, which has been criticized for many years as an expensive failure that should be phased out altogether.

Poppy Bilderbeck (2022-09-12). Former Colonies of the British Empire Want Diamonds Worth $800 Million Back From the Crown Jewels. globalresearch.ca

Michelle Begue (2022-09-12). Seeds for the future in Colombia. america.cgtn.com In the Cauca Valle, in central west Colombia, a research facility was designed to guard one of mankind's most important treasures; seeds. Michelle Begue reports.

WSWS (2022-09-12). Dilapidated dormitory complex in Munich highlights drastic situation facing students. wsws.org The number of students facing the financial abyss continues to grow. A report by the charity Parità§tischer Wohlfahrtsverband makes clear that students have been fobbed off with meagre handouts by politicians for years.

WSWS (2022-09-12). Seattle educators speak out on the consequences of understaffing, inadequate support and low pay. wsws.org Several teachers at Seattle Public Schools spoke with the World Socialist Web Site about the key issues they are fighting to address in their ongoing strike, which began on September 7.

WSWS (2022-09-12). Former Los Angeles teacher speaks out as unions and district impose horrifying conditions at school sites. wsws.org "I'm suffering from all the things the union never fought for. All they do is collect dues and travel to conferences. That's not what the unions are supposed to do. We need real organizations, real leaders."